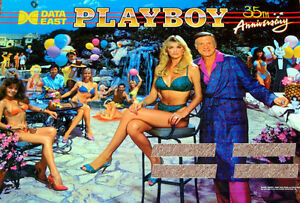 Playboy 35th Anniversary is a pinball machine released by Data East Pinball in 1989. It was designed by Joe Kaminkow and Ed Cebula, with artwork by Kevin O'Connor.

As one would expect, this game commemorates the 35th anniversary of Playboy magazine with a poolside party at Hugh Hefner's Playboy mansion. Shoot up the ramps to enter the Mansion, then play with the animals in the Mansion Zoo for a score multiplier. When you're ready, head on over to the pool patio, where you can take the 35th anniversary playmates to the Photo Shoot and earn a Special. While 1989 Playmate of the Year Kimberley Conrad watches from the playfield, lock two balls into the Grotto for multiball, and try to shoot the ramps for the Jackpot.

Cynics would say this table was simply an excuse to put scantily-clad women in a pinball game, and they'd be right — in the opinion of most players, Playboy 35th Anniversary is a boring table with shallow rules, a game that relies on the license and sex appeal over any sort of depth or play value.