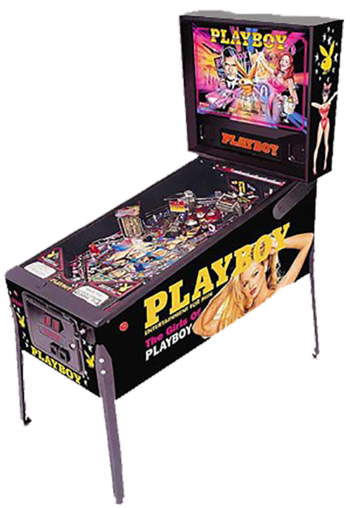 The Girls are Waiting for You...
—Advertising flyer
Advertisement:

Playboy (Stern) is a Physical Pinball Table designed by Dwight Sullivan and George Gomez, with art by Kevin O'Connor. It was released in 2002 by Stern Pinball, and is the third licensed pinball based on the popular men's publication.

Eschewing all pretense of modesty, this game fully and unapologetically embraces its skin magazine heritage. The primary objective is to collect twelve Playmates and start the Mansion Mania Wizard Mode, but along the way are various ancillary tasks, such as spinning the Magazine Rack, hitting the Peek-A-Boo beaded curtains, and unfolding the playfield Centerfold for three-ball multiball and a chance at the Triple Jackpot. Go for a Photo Shoot, join in a Pajama Party, and roll down the Tease Screen, but don't get too distracted on your way to becoming the next Playboy Champion.

This game is notable for coming with three different sets of playfield inserts, allowing operators to set up the game with clothed, topless, or fully nude Playmates. Aside from the sex appeal, it's regarded as a middling game by most pinheads, one that's easy enough for the masses but not challenging enough for expert players. Even so, the game does have its supporters, who insist they enjoy it strictly for its old-school gameplay.