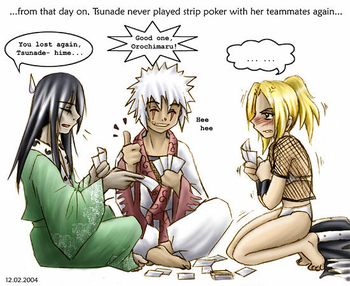 A game that involves the loss of one's clothing. The traditional, trope-naming game is Poker, although any game may be played. Mahjong is a popular game for this in Japan, which is why several arcade games where you play strip mahjong were made in The '90s. The loss of clothing is usually little by little, to prolong the suspense, although this is not always the case.

Most setups will usually involve one or more attractive women, and the male character(s)(to say nothing of the male audience) eagerly looking forward to making at least one lose her shirt... among other garments. More often than not, however, the scene usually switches to the almost fully clothed woman at the table displaying her Royal Flush to a group of guys in varying states of undress — but with at least one in his Goofy Print Underwear.

A common variant involves a regular game of poker where one player is losing so badly that he eventually resorts to betting any stuff he happens to have with him when attempting to win his money back, eventually literally losing the shirt off his back (and the other clothes, as well).

May result in a Shameful Strip if the loser is not eager to disrobe. Expect a savvy participant to use Loophole Abuse to delay this outcome, e.g. by taking off a single earring rather than an actual garment.

This game, more often discussed than actually played, has been the basis for several computer games, as well as two game shows: Strip Poker on USA Network and Räsypokka on Finland's SubTV.

Subtrope of Humiliating Wager. See You Can Leave Your Hat On for stripping without the poker pretext.

Sammy J and Randy try to play strip-poker, but Sammy doesn't seem to know how to play.

Sammy J and Randy try to play strip-poker, but Sammy doesn't seem to know how to play.