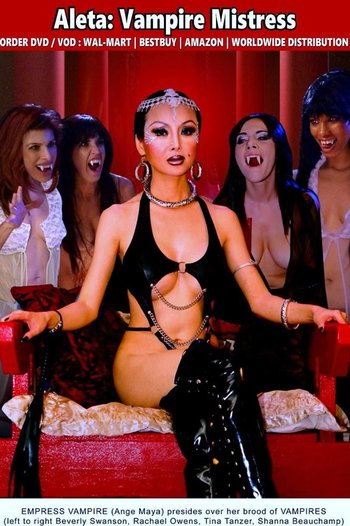 Aleta: Vampire Mistress is a Horror Movie by Phil Condit.

An upscale Halloween Party is crashed by robbers who demand everyone give them their valuables. Said robbery is then foiled by a mysterious figure in a Black Cloak who kills them both. Later on, a sleepover is crashed by some fanged women, most of the girls are killed, and one is missing. What do these two events have in common? Well, both had victims who's bodies were drained of all their blood.

That's right. Vampires. But these aren't just any vampires. These are vampires who serve Aleta (Ange Maya), the very first vampire to ever exist.

Now, government agent Dan Higgins (Beau Nelson) must team up with a psychic named Ariana (Laura Cotenescu), and Ivor Helsing (Garrett Brawith) to track down Aleta and put an end to her evil. That's what Ivor and Ariana are in it for, anyway. Agent Higgins, meanwhile, has an ulterior motive.