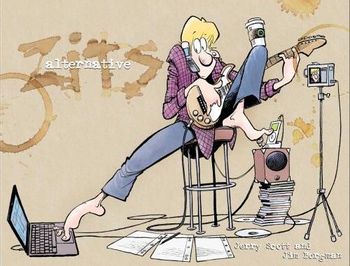 King Jeremy, the Wicked.
"Zits is the worst name for a comic strip since Peanuts."
— Charles Schulz
Advertisement:

Zits is a comic strip written by Jerry Scott (creator of Baby Blues and one-time cartoonist for Nancy) and illustrated by Jim Borgman about the life of 15-year-old high school freshman Jeremy Duncan.

Jeremy lives with his parents, Walt and Connie, who both possess boring jobs and spectacular ignorance (according to Jeremy, anyway). He dreams of 'making it big' as a rock musician, but feels like he lives in the shadow of his highly successful college brother Chad.

Many strips deal with relationships with his friends, the sensible Hector and the extremist Pierce, not to mention his on-off girlfriend Sara. Notably for a teen strip, many of the comics also deal with Connie and Walt, and many of the funniest moments come from their perspectives.