Put Off Their Food 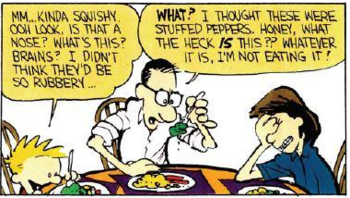 Alice and Bob are sitting down at a restaurant to eat. Alice orders spaghetti. Then Bob, who is a doctor, starts talking about how he operated on a patient with flatworms today, and describes in graphic detail how he pulled out the long, thin, white, worms from the patient's intestines...

...And on second thought, Alice decides she'll have a salad instead.

This trope is when a character had planned to eat a certain food, but changes their mind based on a conversation or experience that causes them to make a mental association between it and something nasty. The character doesn't lose their appetite entirely, they just can no longer stand the thought of eating that particular thing. The opposite is Inappropriate Hunger, where something you'd think would be gross enough to do this instead causes or increases hunger.

This is Truth in Television.

Inside My Mind Nose

After dealing with the horror of the birds, no one wants to eat turkey ever again.

Inside My Mind Nose

After dealing with the horror of the birds, no one wants to eat turkey ever again.