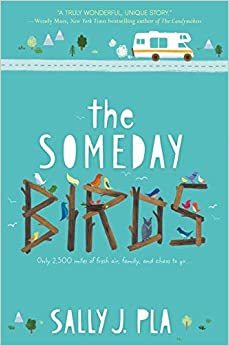 The Someday Birds is a middle-grade novel by Sally J. Pla. Charlie, a bird-obsessed twelve-year-old autistic boy, suffers upheaval when his war journalist father is brain-damaged by an explosion in Afghanistan. Charlie's father and grandmother travel across the country for medical treatments, leaving Charlie, his fifteen-year-old sister Davis, and his ten-year-old twin brothers Joel and Jake alone. Davis decides to take her siblings on a road trip to Virginia, and Charlie struggles to cope with the disruption in his routine. He decides to look for his Someday Birds, a list he and his dad made of birds he would like to see in the wild someday.

The Someday Birds contains examples of: