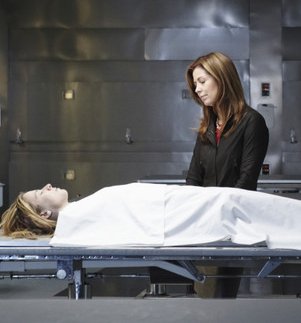 Megan Hunt examining one of her "patients."
Advertisement:

What if Dr. House was a female medical examiner?

Megan Hunt (Dana Delany) was a brilliant neurosurgeon until a car accident caused unknown neurological damage that makes her hands numb occasionally. After she accidentally killed a patient, she decided to switch jobs and become a medical examiner — because, after all, "I can't kill anybody if they're already dead."

Blunt and to the point, she has no problem in butting heads with not only the medical investigator Peter Dunlap (Nic Bishop) and the Chief Medical Examiner Dr. Kate Murphy (Jeri Ryan), but also with the police detectives she helps. One consequence of her previous life as a workaholic, though, is her estrangement from her daughter and her striving to make up for the neglect she had in the past.

Tropes found in Body of Proof: