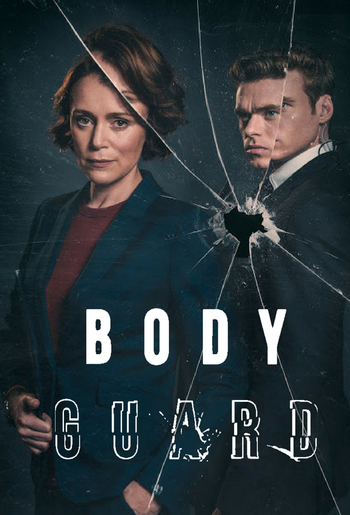 Julia Montague and David Budd
Sergeant David Budd: My job is to keep you safe ma'am, I won't tell you how to do yours.
Julia Montague: No, but you're happy to make it harder.
Advertisement:

Bodyguard is a British BBC One/ITV drama series, created and written by Jed Mercurio (showrunner of the critically acclaimed BBC police series Line of Duty). Starring Richard Madden and Keeley Hawes in leading roles, the first episode aired on August 26, 2018 with a rating of 10.40m viewers in the country; the series went on to become the biggest new BBC drama in at least a decade. It's also going to be released worldwide (except Britain/Ireland) via Netflix.

The show focuses on Sergeant David Budd, a Metropolitan Police Protection Command bodyguard and former British Army soldier. After successfully foiling an attempted train bombing, he is promoted to lead the security detail of Julia Montague, the Home Secretary. Montague, a controversial figure in British politics due to her support of legislation that would intrude on civil liberties and hardline approach to tackling terrorism, is the opposite of Budd ideologically.

He has become critical of British intervention overseas after experiencing war first hand, and has now been entrusted to protect someone whose views he despises.

Meanwhile, senior members of the Metropolitan Police, including Commander Anne Sampson of Counter Terrorism Command and Chief Superintendent Lorraine Craddock of Protection Command begin to grow suspicious of Montague's activities, especially her preferences towards the more secretive MI5 Security Services, and instruct Budd to begin spying on her, testing his loyalties further.

It's not to be mistaken for the same name of another TV drama made in Malaysia and released in the same year.

Beware of spoilers since the show has just finished airing in the UK/Ireland.