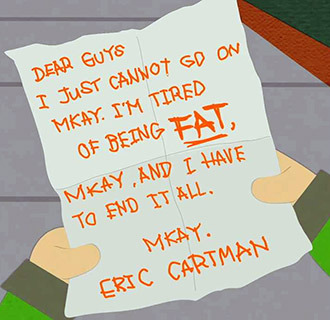 Seems legit.
McNulty: Turns out [he] got himself rung up as a suicide. D.O.D. of 7-21-03.
Coroner: [...] You want me to pull the postmortem on this?
McNulty: Yeah, he's kind of a made guy down there. I just want to make sure that nobody did the suicide to him.
— The Wire
Advertisement:

The police are investigating Alice's death. It appears to be a suicide — there might even be a Goodbye, Cruel World! — but no matter the evidence, resident Cowboy Cop/Defective Detective Bob isn't so sure. Maybe Bob is a personal friend of Alice's and can't believe she would kill herself, or maybe the evidence just doesn't add up. In any case, despite Da Chief's warnings to let it go, Bob decides to investigate further.

Sure enough, Bob is right. In any Crime and Punishment Series, people never seem to kill themselves; with a few exceptions, every apparent suicide is staged to cover up a murder. This happens as a logical consequence of Always Murder because simply confirming that it's a suicide is not very exciting, and doesn't take an entire 40-minute episode. Presumably the police come across a few real suicides between episodes, but if they investigate one onscreen, start looking for the killer.

Note that in Real Life suicide is far more common than murder; in the United States suicide is about 2-3 times more prevalent than homicide, and in many countries the difference is much greater. Sadly, in Real Life, a lot of suicide is treated as a murder investigation, because it's easier to comprehend a loved one fell victim to a homicide than that person killing him/herself off without his/her vicinity noticing anything. Sometimes, this is done to cover up honor killings.

As the examples below show, this trope is sometimes subverted by The Reveal that the suicide was indeed a suicide and only mistaken for a murder — or was a suicide that was also a murder. Contrast this against Suicide, Not Murder and Suicide, Not Accident, two common inversions where the suicide victim intentionally staged their death to look like murder or accident respectively, in order to either allow loved ones to collect life insurance or to frame the person(s) they feel are responsible for the circumstances that drove them to suicide.

See Make It Look Like an Accident for another way to disguise a murder and The Coroner Doth Protest Too Much when the scary authority figures insist that it's not murder despite significant evidence otherwise.