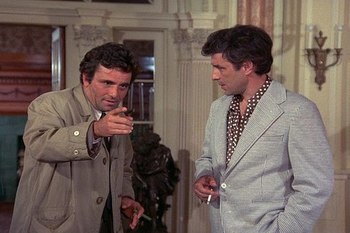 "Etude in Black" is the first episode of the second season of Columbo.

Alex Benedict (John Cassavetes) is an orchestra conductor for the Los Angeles Philharmonic, with a lovely and very rich wife, Janice (Blythe Danner, mother of Gwyneth Paltrow), and an even richer patron in the person of Janice's mother, Lizzie Fielding (Myrna Loy). His life is complicated however by the presence of his gorgeous mistress Jenifer Welles, a concert pianist in Benedict's orchestra. One day, Jenifer gives Alex an ultimatum: either he divorces his wife or she'll tell her about the affair. Alex chooses to take a third option, murdering poor Jennifer and staging her death to look like she committed suicide by gas oven. Unfortunately for Alex, Lt. Columbo is on the case.

Directed by Nicholas Colasanto, who was a decade away from getting hired to play Coach on Cheers. Pat Morita has a bit part as Benedict's manservant. This episode marks the first appearance of Columbo's dog. Two years after this show John Cassavetes the independent film director would cast Peter Falk as the male lead in his film A Woman Under the Influence.