Film / A Woman Under the Influence 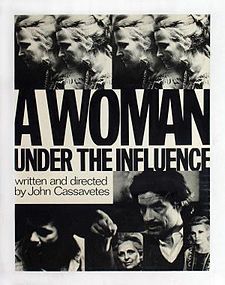 A 1974 psychological drama, written and directed by John Cassavetes, and starring Gena Rowlands. Cassavetes wrote the film as Rowlands, his wife, wanted a role to illustrate difficulties faced by contemporary women, and made it into a film because it would be too intense to perform eight nights a week as a play.

Mabel and Nick Longhetti (Rowlands and Peter Falk) are a lower-middle class family in Los Angeles, with Nick working for a construction company and Mabel the mother of three children. Nick is shouty and mean, and Mabel is cracking under the strain of an unhappy marriage and home. Eventually she has a full-on breakdown that results in her being taken away to an asylum for six months. She's sent home, but things really haven't gotten any better.