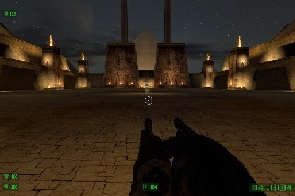 Video game designers love tormenting players with Malevolent Architecture. But beyond filling levels with cool Death Traps, they want to find places for the monsters trying to kill you that will make their sudden attacks on the player the most thrilling.

For experienced players, this might get a bit predictable; they'll be able to guess from looking around the level areas where certain kinds of enemies are going to pop up. What they've discovered is Foreboding Architecture.

A good (though subjective) way to tell that you're playing a videogame with Foreboding Architecture is when you enter a room or passageway, and find yourself preparing to fight off enemies that somehow fail to spawn - because there aren't any of them actually placed there. If the only sign is a load of good stuff, that's Suspicious Videogame Generosity, though.