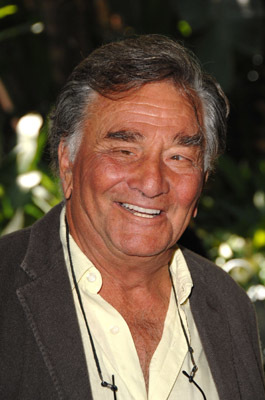 "Along came a police lieutenant named Columbo, and my life would never be the same."
Advertisement:

He was born in The Bronx to Michael Peter Falk, and his wife, Madeline (née Hochhauser). Both his parents were Jewish, originating from Poland and Russia on his father's side, and from Hungary and Poland on his mother's. His distinctive odd stare was the result of having a glass eye, after a cancerous growth required the removal of his right eye when he was only three years old.

He was best known as the titular disheveled but brilliant police detective on Columbo, appearing in 69 TV movies over 35 years. He also appeared in films such as It's a Mad, Mad, Mad, Mad World, The Great Race, Penelope, Murder by Death, The In-Laws and The Princess Bride.

Falk's health started to decline in the latter half of the 2000s, and in December 2008, he was diagnosed with Alzheimer's disease. He eventually passed away from pneumonia in June 2011, with complications of his Alzheimer's being a secondary and underlying cause.