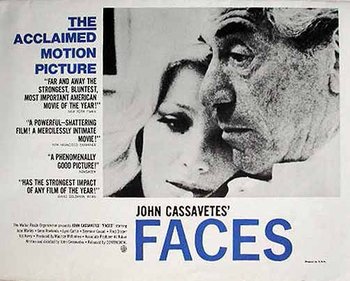 "I'm just a mild success in a dull profession."
Advertisement:

Faces is a 1968 film directed by John Cassavetes.

It is about the existential despair and ennui among upper-class suburbanites. The story centers around a married couple, Richard and Maria; he is an executive at a finance company and she (this being 1968) is his stay-at-home wife. Their marriage might or might not have had something to do with love at some point, but the film finds them having dissolved into mutual resentment. One night a seemingly pleasant but actually tense conversation ends with Richard demanding a divorce. Richard leaves the house immediately, going off to see Jeannie (Gena Rowlands), a high-end prostitute. Maria goes out with her friends, where she meets a businessman at the bar.

Christina Crawford, adopted daughter of Joan Crawford and later of Mommie Dearest infamy, appears as "Woman Scattering Coins at Bar". A young Universal intern named Steven Spielberg served as a production assistant. John Marley, who stars as Richard, found a horse's head in his bed in The Godfather.