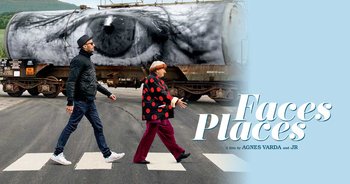 Abbey Road Crossing (not seen in the movie)
Advertisement:

Varda, a famous director from the French New Wave, teamed up with JR, a "street artist" 56 years her junior. JR had prior to this film made his name in the art world for a series of projects in which he took photos, made enormous prints, and pasted them on the walls of public buildings. The idea of the film was for the two of them to travel around France, interview people, take their pictures, and post them up on walls in the manner of JR's previous art works. The resultant film saw them visiting various rural and out-of-the-way locales: a farm, two goat ranches, a mining town, an abandoned housing project, a secluded graveyard, a factory, a Normandy beach with a ruined German bunker (not a D-day beach), and the docks of Le Havre. Finally they make an attempt to visit Varda's old friend and colleague, Jean-Luc Godard.