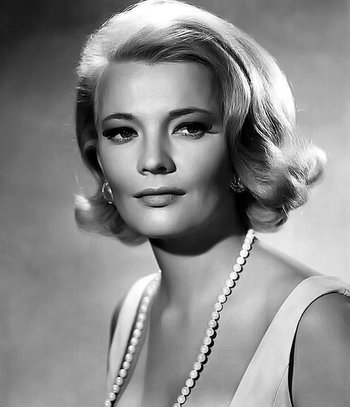 She was born in Madison, Wisconsin, daughter of state legislator Edwin Rowlands. She went to college at the University of Wisconsin before leaving for New York and an acting career in 1950. By the mid-1950s she was appearing in television and on stage, debuting on Broadway in The Seven Year Itch in 1954.

Also in 1954, she married John Cassavetes. Cassavetes, then a television and stage actor like Rowlands, would soon become one of the great directors of American independent film, with Rowlands as his creative partner and leading lady in most every film he ever made. She appeared as an extra in Cassavetes' debut feature, Shadows, and had one of her first starring film roles in his film A Child Is Waiting. She was nominated for Best Actress for her husband's acclaimed 1974 film A Woman Under the Influence, where she plays a housewife slowly descending into madness. She got another Oscar nomination for Cassavetes' 1980 film Gloria, in which she plays a gangster's moll who goes on the run.

Rowlands and Cassavetes were married until his death in 1989. Notable non-Cassavetes films starring Gena Rowlands include Lonely Are the Brave, a 1962 Western in which she co-starred with Kirk Douglas, and 1998's Hope Floats in which she appears as Sandra Bullock's mom. Rowlands' and Cassavetes' son Nick Cassavetes became a film director as well, and Rowlands has appeared in several of his films, including The Notebook.