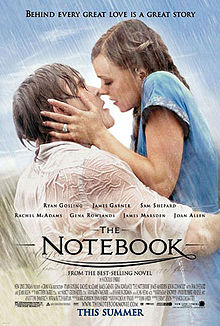 Allie: They fell in love, didn't they?
Duke: Yes, they did.

The Notebook is the 2004 film adaptation of the novel of the same name written by Nicholas Sparks. It was directed by Nick Cassavetes and written by Jeremy Leven from a story by Jan Sardi. The film was released on June 25, 2004.

In 1940, Noah "Duke" Calhoun (Ryan Gosling) and Allison "Allie" Hamilton (Rachel McAdams) have a summer romance. They have hopelessly fallen in love with each other. It goes to pieces as he is a working class guy and she is a socialite, with her parents not believing in their love. They split up but the love doesn't die. Seven years later, they meet up again and the sparks fly. But can they get back together again after all that happened between then and now?

The Notebook provides examples of: