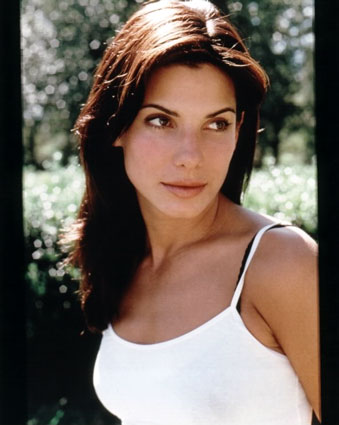 "The acting thing is so beyond my control. Acting isn't mine. You're like a tiny piece in this big, corporate mechanism that needs chemistry and divine intervention."
Advertisement:

She's been Hollywood's go-to actress when looking for slightly tomboyish, quirky, or Hollywood Homely characters who later prove to be Beautiful All Along/Sugar-and-Ice Personality/Not So Helpless after all since The '90s. This was exemplified in the film Miss Congeniality and its sequel in the mid Noughties. She has also starred in Speed, A Time to Kill, Hope Floats, Practical Magic (alongside Nicole Kidman), the Romantic Comedy While You Were Sleeping, and 2013's Gravity, but her biggest hit so far has been the 2015 animated film, Minions.