Film / Lonely Are the Brave 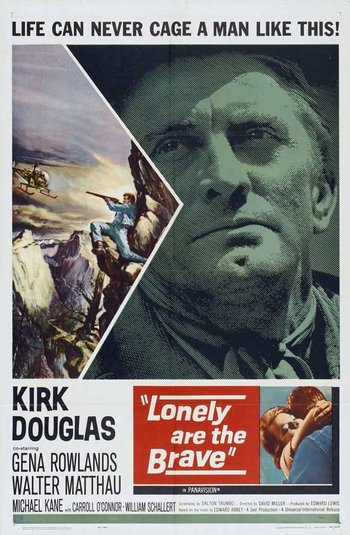 Lonely Are the Brave is a 1962 Western drama film directed by David Miller. It features a script by Dalton Trumbo, adapted from Edward Abbey's novel The Brave Cowboy, and a score by Jerry Goldsmith.

Jack Burns (Kirk Douglas) is an itinerant ranch hand who still lives the life of an Old West cowboy in 1960s New Mexico, shunning all modern technology, riding everywhere on his horse Whiskey, sleeping wherever he ends up in the evening, and refusing to carry any form of identification. As the film opens, Jack visits Jerry Bondi (Gena Rowlands), the wife of his friend Paul (Michael Kane), who has been jailed for aiding illegal immigrants, and vents his spleen about modern society's emphasis on telling people where they can or can't go and what they can or can't do.

Jack decides to break Paul out of jail and gets himself arrested, but Paul is near the end of his sentence and would rather serve it out and return to his family, so Jack breaks out by himself. He heads for the Mexican border, pursued by Duke City Sheriff Morey Johnson (Walter Matthau) and his deputies, the brutish Gutierrez (George Kennedy) and the none-too-bright Harry (William Schallert). Although the odds seem stacked against him, Jack manages to give them the slip, but as he attempts to cross Highway 66 in Tijeras Canyon, he finds that the modern world is about to catch up with him...

Douglas later named Lonely Are the Brave his favourite among his own films. It also provides the first film role for Bill Bixby, who makes an uncredited appearance as a helicopter pilot, and one of the first film roles for Carroll O'Connor, who plays 18-wheeler driver Hinton.