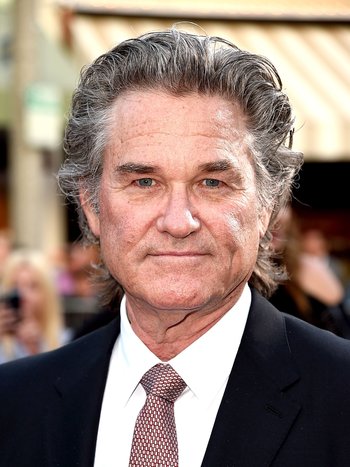 "I've never looked at my career in terms of, 'What haven't I done that I want to do?', I just generally find a story that I think is a good one and go to work."
Advertisement:

Kurt Vogel Russell (born March 17, 1951) is an American actor who began his career as a child in the Western series The Travels of Jaimie McPheeters. He signed a ten-year contract with Disney early in his career that almost led to a lifelong series of typecasting.note Walt Disney was actually making a note about him when he had his fatal heart attack, with even Russell himself having no idea what it means. His best-known adult roles are those of Anti Heroes, especially in his films with director John Carpenter.

While not to the level of Typecasting, several of his roles also tie him to Elvis Presley in some way, portraying him in a 1979 biopic, cameoing as a young Elvis in Forrest Gump, and playing an Elvis Impersonator in 3000 Miles to Graceland who is actually Elvis' son.

He's the longtime partner of Goldie Hawn, by whom he fathered actor Wyatt Russell. He has a son, Boston Russell from a previous relationship, and is the stepfather of Oliver and Kate Hudson.