Film / Now You See Him, Now You Don't 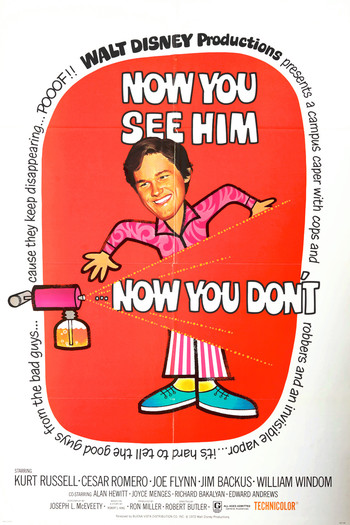 Now You See Him, Now You Don't is a 1972 comedy film released by Walt Disney Productions, and the sequel to The Computer Wore Tennis Shoes (1969). It is the second film in the Dexter Riley trilogy starring Kurt Russell, followed afterwards by The Strongest Man in the World (1975).

Dexter Riley, along with fellow science majors Schuyler and Debbie, concocts an invisibility spray. But when a gang of thieves find out about it and plan to steal it, it's up to Dexter and friends to stop them. The gang, headed by A.J. Arno (Cesar Romero), want the formula to use in a bank robbery. Meanwhile, Dexter employs the spray at a golf tournament, much to the surprise of apoplectic college Dean, Higgins (Joe Flynn).

Now You See Him, Now You Don't provides examples of: