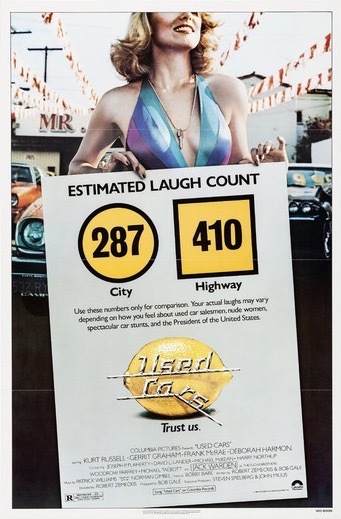 "Nothing sells a car better than a car itself. Remember this: You have to get their confidence, get their friendship, get their trust. Then get their money."
— Rudy Russo
Advertisement:

Mesa, Arizona used car salesman Rudy Russo (Russell) needs money to run for State Senate, so he approaches his boss Luke Fuchs (Warden). Luke agrees to front him the $10,000 he needs, but then encounters an "accident" orchestrated by his brother Roy (also played by Warden), who runs the competing car lot across the street. Roy is hoping to claim title to his brother's property because Roy's paying off the mayor to put the new Interstate through the area. After Luke expires, it's all-out war between the competing car lots, and no nasty trick is off limits as Rudy and his gang fight to keep Roy from taking over Luke's property. Then Luke's daughter Barbara Jane (Harmon) shows up, and Rudy finds himself taking a fancy to her.

Tropes used in Used Cars include: