Film / The Strongest Man in the World 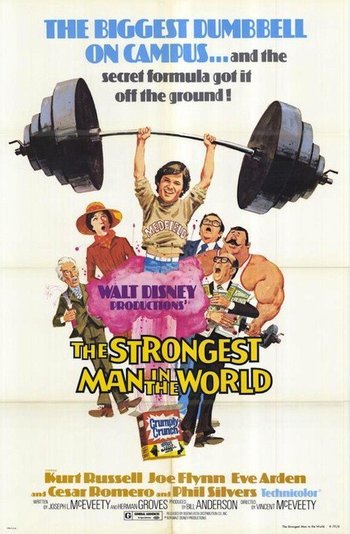 The Strongest Man in the World is a 1975 comedy film released by Walt Disney Productions, and the third and final film in the Dexter Riley trilogy starring Kurt Russell, following 1969's The Computer Wore Tennis Shoes and 1972's Now You See Him, Now You Don't.

Dexter's science class continues to make a huge dent in Medfield College's budget with their experiments. With Dean Higgins' job on the line, he fires Professor Quigley in protest. During the kerfuffle, Dexter's experimental strength serum ends up in Schuyler's vitamin cereal experiment. After eating the cereal the next morning, Dexter discovers the cereal has given him Herculean strength. Upon seeing this, Higgins takes the opportunity to market it in an attempt to get Medfield out of the hole yet again to the company who made the cereal, Crumply Crunch, who decides to challenge their rival, Krinkle Krunch, at a weightlifting contest. Unfortunately, said rival company is in cahoots with recently-released A.J. Arno, who wants to steal the strength serum for themselves.

Tropes found in The Strongest Man in the World: