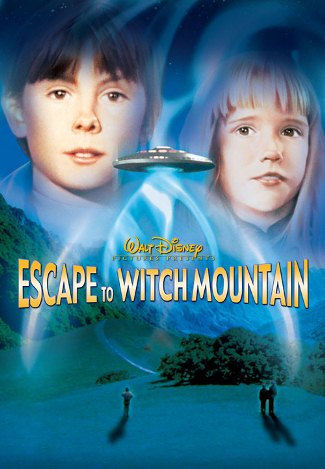 Escape to Witch Mountain is a 1975 Disney film starring Kim Richards, Ike Eisenmann, Ray Milland, and Donald Pleasence, directed by John Hough. It is the Film of the Book of the same name, about siblings Tony and Tia Malone (Eisenmann and Richards). We are introduced to them as they are admitted to an orphanage/school. They have no memory of where they came from before they were placed in foster care, and try to conceal the fact that they have Psychic Powers. When Tia sees an accident before it happens, it draws the attention of a wealthy businessman, Aristotle Bolt (Milland), who wants to exploit the siblings' powers. They try to remember where they came from, guided by Tia's "star case", a leather box on a strap with a curious double star design on the lid, which she has had as long as she can remember, and which contains a hidden map to a place called Witch Mountain.
Advertisement:

Tony and Tia must escape from Mr. Bolt's compound and travel to Witch Mountain in an attempt to find out where they came from. Along the way they enlist the help of an old drifter (Eddie Albert) to conceal them as Mr. Bolt uses his influence to track them down.

In 1978, it was followed by Return from Witch Mountain, with Richards and Eisenmann reprising their roles. A third episode, ignoring the second and featuring none of the original cast, was titled Beyond Witch Mountain, made as a pilot for a TV series and shown as an episode of The Magical World of Disney in 1982. Two remakes were made, a first one in 1995 under the same title that starred Elisabeth Moss, Robert Vaughn, and Brad Dourif and a second in 2009 called Race to Witch Mountain and starring Dwayne Johnson.