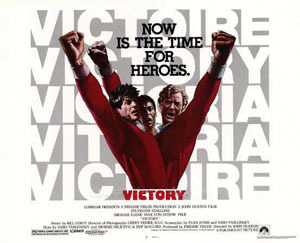 A 1981 film (also known as Victory in North America) set during World War II, in which a football team formed by Allied prisoners of war is forced to face a German team.

John Colby (Michael Caine) is a former professional footballer, now prisoner of war in a German camp, who gets roped in by the German camp commander (Max von Sydow) to have a team of his choosing play an exhibition match against a German team. While Colby begins to get his team ready for the game (which includes several POWs from other camps, and Antillan Luis Fernandez (Pelé)), Canadian Robert Hatch (Sylvester Stallone) is trying to escape the camp, and gets into the team to get advantage of the relaxed security around the team. When it turns out that the game will be played in Paris, the French Resistance agrees to help the team escape at halftime, but when the choice becomes between escaping and winning the match, things change a lot.