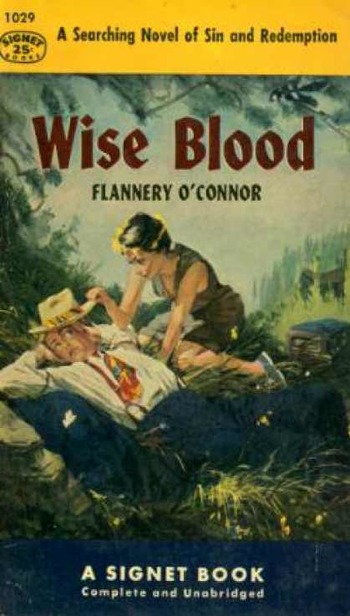 That belief in Christ is to some people a matter of life and death has been a stumbling block for readers who would prefer to think it a matter of no great consequence. For them Hazel Motes' integrity lies in his trying with such vigor to get rid of the ragged figure who moves from tree to tree in the back of his mind. For the author Hazel's integrity lies in his not being able to. ... Free will does not mean one will, but many wills conflicting in one man.
— Flannery O' Connor, author's note to the second edition
Advertisement:

Wise Blood is a 1952 novelnote four chapters were initially published as short stories in 1948 and 1949 by Flannery O’Connor. In 1979, it was adapted into a film by John Huston.

Hazel Motes is the grandson of a preacher. After serving in an unspecified war where he didn't so much lose his faith as realize that he never wanted that faith in the first place, he returns to Tennessee. He finds living without Christ to be more complicated than he expected, and that it's harder to give up preaching than it was to renounce Jesus.

Hazel finds himself standing on the hood of his car and expounding—for everyone with ears to hear—on what he calls the Church Without Christ, where "the deaf don't hear, the blind don't see, the lame don't walk, the dumb don't talk, and the dead stay that way." His only follower is Enoch Emery, an 18-year-old who believes he has "wise blood" that tells him secret things. Enoch thinks modern man needs a new Jesus; his first candidate for the position is Hazel Motes, and his second is a mummy in a local museum. Hazel wants nothing to do with Enoch's search, and finds himself fighting corruption in his nascent anti-church: The evangelist Hoover Shoats snatches Hazel's message, renames it The Holy Church of Christ Without Christ, turns it into a money-making scheme... and gets more followers than Hazel ever did.

Meanwhile, Hazel associates with Asa Hawks—an itinerant preacher who blinded himself with quicklime to prove his faith—solely so he can rebuff the preacher's attempts to redeem him. And he becomes increasingly frustrated as Asa does nothing of the sort. Hazel's attempt to seduce Sabbath Lily, Asa's daughter, are similarly frustrated when it becomes clear that she's just as interested in seducing Hazel.

Eventually, in spite of Hazel's best efforts, God's grace finds him and leaves him a changed man. But it's not entirely clear whether or not he was saved by this encounter.