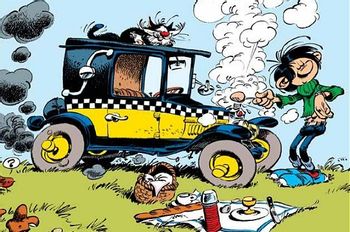 Look on the bright side: it's convenient for boiling eggs.
Ray: Everybody can relax, I found the car. Needs some suspension work and shocks and brakes, brake pads, lining, steering box, transmission, rear-end...
Peter: How much?
Ray: Only $4,800. note  Roughly $12,000 in 2019 dollars
[Venkman looks shocked]
Ray: Maybe new rings, also mufflers, a little wiring...
— Ghostbusters
Advertisement:

It was cheap, it was affordable, it was there. It's a car... allegedly. And it has many maladies you choose to interpret as charming quirks. It tops out at about 40 miles per hour (45 going downhill). It breaks down a lot, especially during plot-critical moments, and gets parking tickets while in motion. It needs to have special-order replacement parts since the dealer, manufacturer, and country it came from no longer exist. The only parts that aren't about to fall off are the ones firmly rusted in place. It has more duct tape than paint on it, has been in the news more times than on the road, and looks like it came out of a junkyard.

In other words, it stands accused of being a motorized vehicle, but this has yet to be proven in a court of law.

The polar opposite of the Cool Car. Often found on The Rez, in fictional foreign countries, or in the parking lot of Honest John's Dealership. Expect My Car Hates Me to happen a lot when driving this junker. Compare and contrast Sinister Car, which is in perfect technical shape, but can be even more dangerous to its driver and bystanders than the Alleged Car. May or may not go hand in hand with Drives Like Crazynote  If it does, then pray that at least the seat belts work.

Sometimes, though, the owner of the alleged vehicle will become quite emotionally attached to it. Sometimes it's because only the owner knows the car's little quirks and can keep the thing running. Sometimes it's Stockholm Syndrome. Sometimes they've been through so much together, it's hard to let go.

The Hero's Classic Car is a dated model; it can be Played for Laughs if the car is in bad shape.

If a horse, a house, or a computer gets this treatment, then you're respectively dealing with The Alleged Steed, The Alleged House, and The Alleged Computer. The subversion of this trope, where a car looks like this but is secretly a Cool Car, is What a Piece of Junk. A Chronically Crashed Car may become one of these if it gets repaired one too many times. A Rice Burner is often an attempt to make one of these look like a Cool Car. Either this or a bicycle (or worse, an alleged bicycle) will be part of a Real Vehicle Reveal. It may have been purchased at Honest John's Dealership. See also Resurrect the Wreck. This may overlap with Sentimental Shabbiness.

Real Life examples have their own page. Two of them. Many, many real-life cars have become inspirations for what you see below; any such real-life cars should be placed on that page. There is a depressing number of them.

Sam and Helix did manage to get it off the ground by themselves, an act they're very proud of. Unfortunately, the parade committee forced them to return the balloons shortly thereafter.