Film / Two for the Road 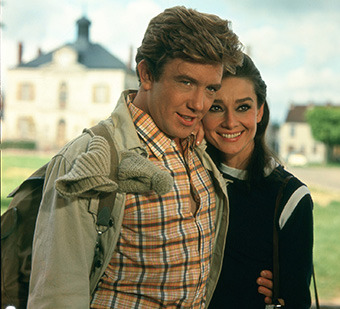 They make something wonderful out of being alive!
Advertisement:

Two for the Road is a 1967 British romantic comedy-drama film, directed by Stanley Donen and starring Audrey Hepburn and Albert Finney.

Sometime in the 1950s, two Britons, Mark and Joanna Wallace, meet while vacationing in the south of France. They fall in love, get married, and raise a daughter over a period of ten years, continuing to take regular vacations to the south of France. The film follows them over multiple French vacations as their relationship changes and evolves, the bloom of first love fades, and they have to figure out how to live together.

One of the more famous examples of Anachronic Order in film history, as the narrative continually jumps back and forth between their first whirlwind courtship, a considerably more strained relationship a decade later, and various points in between.

Two for the Road provides examples of: