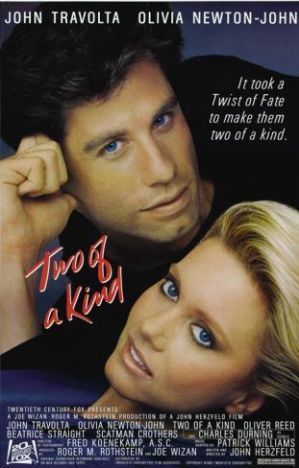 Two of a Kind is a 1983 American romantic fantasy comedy film directed by John Herzfeld starring John Travolta and Olivia Newton-John. This is Travolta and Newton-John's second film together after 1978's Grease.

In Heaven, God does not like what he sees down on Earth, and wants to order up another flood and start all over again. Four angels, who point out his promise in the rainbow that he never would do that again, persuade him to reconsider, reasoning that, if a typical Earth man can reform, it would prove that all mankind is capable of it. God (voiced by an uncredited Gene Hackman) agrees to the scheme, and the typical Earth man selected by the angels is Zack Melon (Travolta) — a cash-strapped inventor who, threatened by loan sharks, decides to hold up a bank. Zack points his gun at bank teller Debbie Wylder (Newton-John), who ostensibly gives him all the money. But, when Zack peers into the sack after the robbery, he sees that the bank teller, Debbie Wylder (Newton-John), has substituted bank deposit slips for the cash and has kept the money for herself. Zack tracks her down to reclaim his stolen money. While dodging the loan sharks and the evil interventions of the Devil (Oliver Reed), the two come to develop a relationship, which is soon put to test.