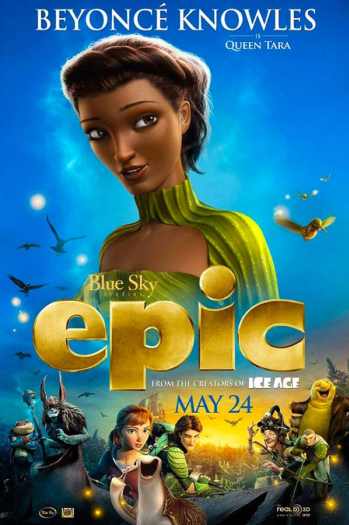 For some reason, celebrities do a lot of voice acting in big-budget animated movies. Maybe the producers figure more people will see movies with big-name stars in them. Maybe John Q. Public just loves his celebrities. The fact celebrities can enjoy acting work without having to deal with costumes, script memorization and other elements of live-action film is another factor (although motion capture animation has many of those demands). Regardless, regular voice actors often get cast aside in favor of someone more famous when a big, important animated movie is made for public consumption.

Sometimes this results in viewers not only becoming aware of just who's voicing the characters, but mentally referring to the characters by the actors' names, especially if it's been a while since they've last seen the movie.

As it turns out, professional voice actors (especially Billy West and Tara Strong) are not exactly pleased that their jobs are being poached by actors from other disciplines, which makes sense, as it implies that the performing skills are interchangeable. While professional voice actors are capable of utilizing a wide vocal or acting range to create a given character's personality, celebrities are usually cast for marketing purposes because audiences will recognize the popular actor.

It's important to note that this is not always a recipe for disaster. Some celebrities prove to be very talented at voice acting, and would likely be among the most prolific at the profession if they did it exclusively. For instance, the master actor Dustin Hoffman won an Annie Award for performing the voice of Master Shifu in Kung Fu Panda to go along with his older Oscars. Indeed, there are a fair number of performers who have managed strong careers in both fields and do not qualify for the pitfalls of this, although becoming equally famous in both is unusual. Some on-stage/Hollywood actors — Mark Hamill and Eden Riegel, to name two — moved on to voice acting later in their video careers.note  Also, if anyone ever visits a Fan Convention, professional voice actors will often recommend newcomers be on-stage theatre actors before entering the voice acting business.

That said, Billy West's scorn has been (arguably) justified in some cases where celebrity voice actors haven't delivered the goods, such as Cameron Diaz's notoriously flat performance in Shrek; or in cases where an actor is wildly miscast, such as Billy Bob Thornton in the dub of Princess Mononoke. That's where the reason for this being a separate decision becomes apparent. West himself has indicated that he has fewer objections to performances like Robin Williams in Aladdin, Tom Hanks and Tim Allen in Toy Story or Mike Myers and Eddie Murphy in the aforementioned Shrek because they were all actually playing characters with their voices... y'know, the acting part of voice acting.

Subtrope of Stunt Casting. Often turn out to be examples of Ink Suit Actors. If most voice actors in a single work are this, they're an All-Star Cast. See also Pop-Star Composer for the musical equivalent, and "Sesame Street" Cred for when celebrities star on children's shows. Likely to happen in a Concert Episode if the famous person is a musician. When a celebrity being cast as the main character is the main draw of a series, that's Celebrity Toons. If a person takes a celebrity voice role because of their children, that's So My Kids Can Watch. If the voice role was done before the person got famous (a common trend among those who began acting in their childhood), that would be Retroactive Recognition.

open/close all folders
English (Pinball)
English (Video Games)
English (Other)
Japanese (Anime)
Japanese (Foreign dubs)
Japanese (Video Games)
Portuguese (Brazil)
Spanish (Mexico and Latin America)
Tagalog/Filipino (Philippines)
Sweden
France
Germany
South Korea
Italy
Before posting any example, let's notice that the usage of celebrities to voice animated movies in Italy is not only very common, but also not very appreciated by many in later years, since in modern times they tend to get people whose acting performances are not that great. That said, though...

Ukraine
Multiple
These are special cases where one or a group of characters are chosen to be voiced by a celebrity in multiple dubs: The Madagascar sequel had many different singers and rappers voice Moto Moto, in order to give off that sexy vibe he had:
Feedback