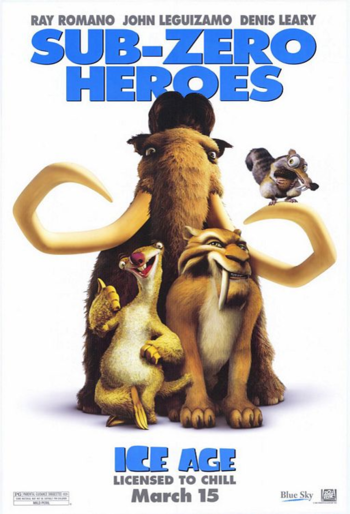 The Ice Age is coming.
"I don't know about you guys, but we are the weirdest herd I've ever seen."
— Sid
Advertisement:

Ice Age is a 2002 computer-animated movie made by 20th Century Fox and Blue Sky Studios. It was the first film in the Ice Age franchise, which would soon become Blue Sky's Flagship Franchise.

In the Ice Age, a clumsy sloth named Sid, a grumpy woolly mammoth named Manny, a sneaky saber-toothed cat named Diego and an acorn-obsessed saber-toothed squirrel named Scrat are forced to become unlikely heroes. The first three reluctantly come together and brave the deadly elements of the impending big freeze. Scrat has his own parallel Story Arc. He tries to bury his beloved acorn, but he only manages to create mayhem around him.

In the first Ice Age film, a migrating herd is traveling south—except Manfred (Ray Romano), a reclusive wooly mammoth traveling north. Meanwhile, a ground sloth named Sid (John Leguizamo) is left behind sleeping when the rest of his family and all the other prehistoric mammals begin the journey to the south and decides to follow him. When a human camp is attacked by a pack of vengeful sabers, a woman takes her baby and jumps in a river. Before she dies from her trauma, Manny and Sid rescue the baby. The two animals decide to search for the father and return the baby to him. Diego (Denis Leary), one of the saber-tooths that attacked the humans, comes also claiming the baby. Diego starts to work as a double agent, but along the journey he is befriended by Manny and Sid and finally joins them.

The film was followed by

Also spawned three short films that are on the DVDs: Gone Nutty and No Time for Nuts, both short adventures starring Scrat, and Surviving Sid, obviously centered around Sid. And there's A Mammoth Christmas, a Christmas Special, as well as The Great Egg-Scapade, an Easter Special. It also has a series of tie-in games. There are also two 4-D exhibitions, one based off an extended version of No Time for Nuts and one based off the third film, which have been presented at various zoos and amusement parks.

Scrat Tales, a series of shorts focusing on Scrat and his son, debuted on Disney+ in 2022; it marked the final Ice Age project produced by Blue Sky Studios. The same year, a spin-off movie titled The Ice Age Adventures of Buck Wild premiered on the platform as well, produced by Bardel Entertainment.

Also in 2022, a short was uploaded by the Blue Sky team

as their final piece of animation in which Scrat finally gets his acorn. This was made as a goodbye from the company as well as a symbolic Bookends of sorts since Ice Age was their first major project and hit, the franchise having started with Scrat's antics.