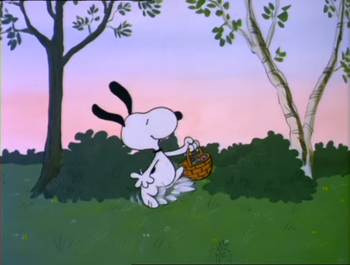 The twelfth Peanuts special, It's the Easter Beagle, Charlie Brown was first broadcast on CBS in 1974. It continued to air annually on that network through the year 2000. From 2001 to 2014, ABC aired it intermittently, pairing it with the 1966 special Charlie Brown's All-Stars. Easter Beagle has not been broadcast on television since 2014, incidentally the year of its fortieth anniversary.

An Easter Special, obviously, it essentially consists of three interconnected storylines. Linus insists that they don't have to worry about painting Easter eggs because the Easter Beagle will give Easter eggs to all the good little children on Easter Sunday. No one believes him except, of course, for Sally. Meanwhile, Peppermint Patty is trying to teach Marcie how to make Easter eggs, but Marcie keeps ruining the eggs before they can even get started. Finally, Snoopy has to get Woodstock a new home.

It's the Easter Beagle, Charlie Brown contains examples of: