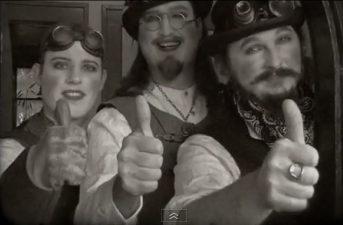 Whom should you telegram?
Advertisement:

The League of S.T.E.A.M. (Supernatural and Troublesome Ectoplasmic Apparition Management), a.k.a. the "Steampunk Ghostbusters", is a Southern Californian performance art troupe popular in the steampunk community and specializing in live interactive themed entertainment.

The League is loosely modeled after the 1984 film Ghostbusters, translating the idea of a "paranormal pest control service" into a neo-Victorian steampunk setting. The four main members of the League have created backpacks reminiscent of the Ghostbusters' backpacks, each allegedly performing some necessary paranormal investigative function. They are known for these and other creative steampunk "inventions" (functional props), and have also been written about and interviewed as leading examples of steampunk style.

The Adventures of the League of S.T.E.A.M. provide examples of:

Alternative Title(s): The Adventures Of The League Of STEAM