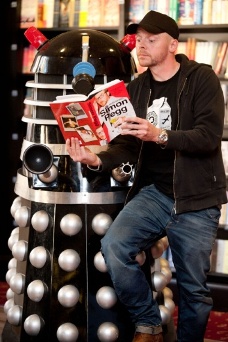 To explain, he's reading his book to a Dalek.
"Both me and Edgar are firm believers in never underestimating or talking down to an audience, and giving an audience something to do, to give them something which is entirely up to them to enter into the film and find these hidden things and whatever."
Advertisement:

Simon Pegg (born Simon John Beckingham on 14 February 1970 in Brockworth, England) is a British actor and comedian who has had breakout success in a wide range of movies.

He began as a TV actor and gained success for Spaced, which he co-wrote with Jessica Hynes. He later collaborated with Spaced helmer Edgar Wright and actor Nick Frost on Shaun of the Dead, Hot Fuzz and The World's End. Since then, Pegg has starred in a few films and was cast as Scotty in J. J. Abrams' reboot of Star Trek. He and Deep Roy are the only two actors who have played roles in all three of the juggernaut English-language SF franchises: Doctor Who, Star Wars, and Star Trek (and in the last-named one, Roy plays Pegg's sidekick).

Pegg is known for his quick-witted and sarcastic characters, and for often playing a slacker. He's quickly become a poster boy for nerd culture for many minor projects like a one-episode role in Doctor Who and his two-man re-enactment

He admits that he hates being famous. He warns anybody seeking for fame that "It's like jumping into a pool full of sharks."