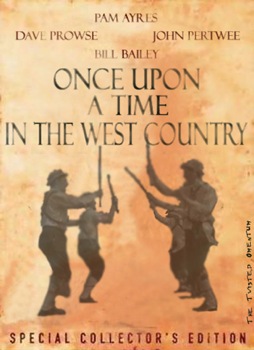 Yeah, it's kinda like that.
'Cause I got a bran' new combine 'arvester an' Ah'll give you the key!
— The Wurzels

Technically it's the South West Country but that doesn't have the same ring to it. A crucial note before we begin; in the UK, "Cider" refers exclusively to Hard Cider with alcohol in it, anything else is called apple juice.

The West Country is the informal term for the area of the United Kingdom that encompasses the counties of Cornwall, Devon, Dorset, Somerset, Gloucestershire, Wiltshire and Bristolnote Between 1974-1997, there would have been another county included in this: Avon, which was made up of Bristol, with bits of Gloucestershire and Somerset added into it for good measure. When the county was dissolved, these bits then became the City and County of Bristol, and the Unitary councils of Bath and North East Somerset, North Somerset, and South Gloucestershire. With the exception of Bristol, these are technically counted as now being parts of Somerset and Gloucestershire for ceremonial reasons., however with more than a few connections to some South East counties such as Hampshire, Berkshire and the Isle of Wight, the latter of which having a very similar dialect which is largely interconnected with that of the West Country. Known for being very rural with towns and cities being small and spread out. As such it's mostly depicted on TV as farmer towns where the inhabitants wear wellies and tweed and speak with thick Somerset accents, even though the majority of people living in the South West actually speak a much diluted version closer to the English of the home counties. Known to everyone else as "Mummerset". Expect plenty of 'oo-ar's!' to be heard and some cunning wit or action to follow. Was known as "Zedland" to wits in the 19th century, owing to the way the accent turns S to Z at least at the front of words ("Oi be drinkin' zoider!"); what often gets forgotten is that the dialect (historically at least) also turns F to V (in linguistic terms, it voices voiceless initial fricatives), and that this has been a feature of southwestern varieties of English since at least the Early Middle English period (shortly after the Conquest).

Generally a laid-back set of counties too, especially considering the amount of comedians the area has produced. Bristol is the largest city in the region note with the Bournemouth/Poole conurbation on the eastern edge of the west country coming a close second. Other important towns and cities include Plymouth, Exeter, Swindon, Bath and the Gloucester/Cheltenham conurbation and as such is the focal point for most events of notice.

Known for producing huge amounts of cider and scrumpy, cheddar cheese note to which Somerset is the original home; the village of Cheddar is there, clotted cream, cream teas note of which there are two key styles or 'methods' — Devonshire (where you spread the cream on first) and Cornish (jam first) — both of which are hotly debated over which is the better way! and Cornish pasties. Naturally, they are all consumed in greater quantities down there than in the rest of the UK. Also gave us the Glastonbury Festival too and also is the location of Stonehenge in Wiltshire. Also, Yorkshireman Patrick Stewart trained as an actor in this area. Weston-super-Mare in Somerset was also fairly well known for its pier by the beach and was an icon in the West Country; the pier was seriously damaged by a fire in 2009, but has reopened as of late 2010. Is also quite popular amongst engineers due to having such marvels like the Severn Bridges and the Clifton Suspension Bridge in Bristol. The fact Bristol also had an important role in the Aerospace Industry and helped build Concorde also helps — Concorde's last flight ended up returning it to Bristol, where it stood outside at Filton Airport for several years until a new museum, Aerospace Bristol

, was opened with a purpose-built indoor exhibition for it. The local airport also started doing flights from there to New York City a few years back.

Bristol also is somewhat notorious for its relationship with Pirates because the Bristol Channel coast was a major sea-trade region during the age of pirates, and the coast was a notoriously dangerous for shipwrecks (not always accidental), so some of the speech is derived from pirate jargon (Plymouth and Cornwall also have the pirate association, since many pirates came out of Plymouth and Cornwall's economy was once reckoned to be 90% reliant on smuggling). The West Country pirate connection has seeped deep into pop culture across the English-speaking world: Cornish-raised actor Robert Newton's

performances as Long John Silver and Blackbeard, the source of all modern preconceptions for how to Talk Like a Pirate, are based on a stylised West Country accent (befitting the Bristol connections for both characters). Parts of "Brizzle" have recently been renovated and tidied up ... although visitors should continue to avoid Knowle West unless they absolutely have to go there.

Gloucestershire has the Cotswolds running through it, and the villages, especially to the north of the county, have lots of picture perfect sandy coloured limestone cottages. Gloucestershire was also an important area in Roman times, and the town of Cirencester, or Corinium, as it was known at the time, was the second most important city in Roman Britain. To the west of the country, on the border with Wales, is the Forest of Dean, a former royal hunting Forest, who’s locals have a dialect only known to them and bit of an reputation with the rest of the county, possibly due to it being one of the most undeveloped parts of the county but one area called Puzzlewood was used for filming Star Wars and Merlin (2008). Wedged between these two parts is the River Severn, which almost splits the county in half, in an area known as the Severn Vale. Famous for the Severn Bore, a natural tidal wave phenomenon where too much water tries to get through too narrow a channel (Gloucestershire is where the river starts to widen out into the Severn Estuary, that then leads to the Bristol Channel, which, incidentally, used to be called the Severn Sea.) comes up through the river twice a month (Usually a couple of days after a new and full moon) and attracts people to try and surf it, until it peters out somewhere north of Gloucester. Due to the Severn having the second highest tidal range in the world, Gloucestershire is bizarrely classed as a coastal county by The European Union, despite the fact that the only beach in the county is a man made one on a lake by Cirencester, which is a good twenty miles inland, and the Severn should definitely never be attempted to swam in that section due to it's dangerous tides and quick sand. Like Bristol, the city of Gloucester is also associated with the aerospace industry, as the Glosternote So foreigners could easily spell it Aircraft company producing the Hurricane, Typhoon, and pioneering jet-powered Meteor.

North Devon is best known for its combination of rugged, inhospitable coastline and incredible beaches, plus a multitude of seaside villages and resorts with a thriving tourist industry, such as Mortehoe, Woolacombe, Ilfracombe, Lynton and Lynmouth. Its long beaches and healthy surf make it a popular destination for surfers and holidaymakers alike. North Devon is also home to some outstanding valleys and cliffs, with Watersmeet and the Valley of the Rocks near Lynton and Lynmouth held in particularly high regard.

Plymouth and most of West Devon are liberally drenched in references to Sir Francis Drake, British National Hero of the 16th Century and the last interesting person to come out of the county (apart from actor twins Harry and Luke Treadaway). Plymouth is also the site of the Mayflower Steps and the departure of various soon-to-be-Americans from the country.note Apparently, we've just said that no-one who left to found America was worth noting. Moving on...

Generally, West Country folk share more of a rivalry with the Welsh than the rest of England. Part of this is due to the allegations that the Welsh were unhappy with the fact that the first Severn Bridge had its toll booth on the English side. When the second bridge was built, it had its toll booth on the Welsh side, however the toll booths were removed from both Severn Bridges in December 2018, making it free to cross the Severn estuary for the first time in over 2000 years.

Examples of famous/fictional people and Media: