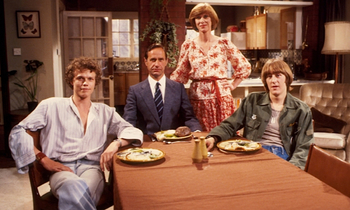 The Parkinsons. Left to right: Russell, Ben, Ria and Adam
Leonard: We are all kids chasing butterflies. You see it, you want it, you grab it, and there it is, all squashed in your hand.
Ria: I am one of the few lucky ones, I have a pleasant house, a pleasant man and two pleasant sons. My butterfly didn't get squashed.
— (dialogue between two people contemplating an affair)
Advertisement:

Butterflies was a British sitcom series written by Carla Lane that was broadcast on BBC2 from 1978 to 1983.

The situation is the day-to-day life of the Parkinsons, a typical upper-middle-class British family living in what was taken to be a smart suburb of Londonnote it was actually the upscale town of Cheltenham, Gloucestershire - more The West Country - but a very affluent piece of, presented in a tragicomic and somewhat bittersweet style. There are both traditional comedy sources (Ria's cooking, family squabbles) and more unusual sources such as Ria's mid-life crisis which has her teetering on the brink of an affair with Leonard, a somewhat more romantic and dashing man than her dour dentist husband. This unconsummated relationship with the outwardly-successful Leonard drives the plot. Ria is still in love with her husband, Ben, and has raised two generally well-adjusted but lazy sons, yet finds herself dissatisfied and in need of something more. Throughout the series Ria searches for that "something more" and finds some solace in her unconventional friendship with Leonard. In a 2002 interview, Carla Lane explained, "I wanted to write a comedy about a woman contemplating adultery."

Tropes pinned to a backing board like butterflies in a collection include: