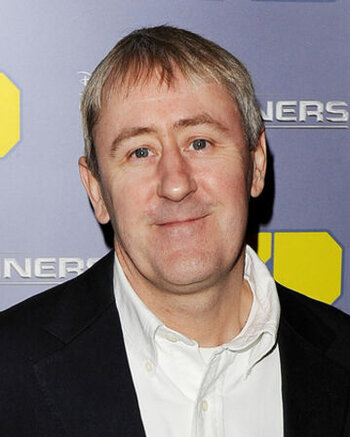 "I adore being an actor, but I didn’t especially want to be famous."
Advertisement:

Nicholas Lyndhurst (born 20 April 1961 in Emsworth, England) is an English actor, best known for portraying Rodney Trotter in the long running Brit Com Only Fools and Horses. While generally overshadowed by his much higher profile Horses co-star David Jason, Lyndhurst has had a solid career in UK television and scored a bonafide hit of his own with another Brit Com Goodnight Sweetheart. His big break was playing one of the main character's sons in the bittersweet Brit Com Butterflies. He also played Fletcher's son in Going Straight, the 1978 sequel to Porridge. He went on to star alongside Dennis Waterman and Denis Lawson in the BBC crime drama New Tricks before its cancellation.