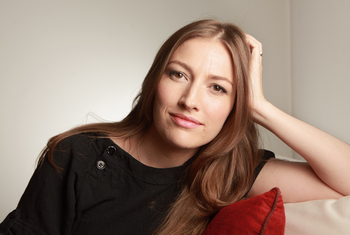 Kelly Macdonald (born February 23, 1976 in Glasgow, Scotland) is a Scottish actress, best known as Carla Jean Moss in No Country for Old Men, Diane in Trainspotting and its sequel T2 Trainspotting, and Margaret in Boardwalk Empire, as well as such movies as Finding Neverland, Nanny McPhee, Choke, Harry Potter and the Deathly Hallows, Part 2, Gosford Park and Brave.

She's married to Dougie Payne, bassist of the rock band Travis, and they have two children. They separated in 2017.

Kelly Macdonald and her works provide examples of: