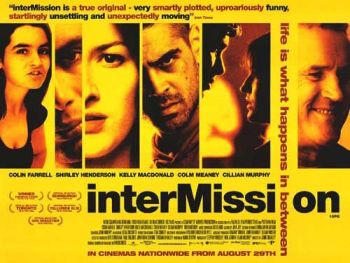 The film is a raucous story of the interweaving lives and loves of small-town delinquents, shady cops, pretty good girls and very bad boys. With Irish guts and grit, lives collide, preconceptions shatter and romance is tested to the extreme. An ill-timed and poorly executed couple's break-up sets off a chain of events affecting everyone in town. There's the hapless romantic and his sex-starved best friend, the hotshot detective and the crook he's after, a young girl on the rebound with an older married man — not to mention his deserted wife, an ambitious TV producer, an abandoned fiancée, a preteen trouble-maker — all of whom are unaware of how their choices are profoundly intertwined. Add a botched robbery, some brown sauce, a woman's moustache, flying rocks and dancing single seniors and you have interMission.

Tropes exemplified by this work include;