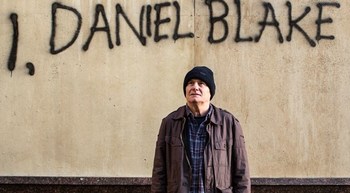 After suffering a major heart attack, former carpenter Daniel Blake seeks Employment and Support Allowance. However, while his doctors tell him that he must not return to work, the government's less accurate test states that he is fit for work and his only choice for benefits is Job Seekers Allowance, a benefit that requires he proves he's been looking for work. At the job center he meets Katie, a young woman with two children (Daisy and Dylan) facing a similar issue, and the two try to cut through the red tape.