Film / I Am the Pretty Thing That Lives in the House 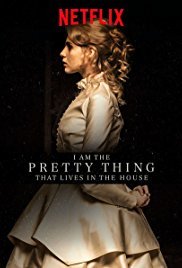 I Am the Pretty Thing That Lives in the House is a 2016 horror film, directed and written by Oz Perkins. Lily Saylor (Ruth Wilson), a hospice nurse, moves in with a retired horror story author named Iris Blum (Paula Prentiss). Given the eerie and mysterious nature of both the house and Iris, Lily suspects something sinister has occurred.