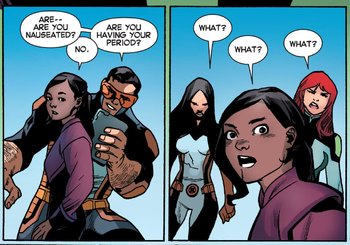 Sorry, never heard about that thing.
Al: You know who was a good woman? Veronica. You know, from Archie Comics? Veronica never had a period.
Steve: That's true. But she still had an attitude problem.
Al: You're right. There are no good ones.
— Married... with Children
Advertisement:

A subtrope of The Law of Conservation of Detail, No Periods, Period is the fact that unless there's a specific, plot-related reason to mention that a female character is menstruating, the subject will not be brought up. Periods do appear frequently for plot-related reasons; do not list those here.

It is common in fantasy that female elves do not have periods. Fairies and youkai are also often unaffected. This often applies to Cute Monster Girls, to make it clear that they are not human or only half human. Female vampires do not have it any more, which makes sense, considering that they are no longer living things, but walking corpses.

Additionally, there are certain circumstances in which human menstruation will halt without medication. It can happen due to times of intense emotional and physical stress, and it's common for athletes under intense training regimens to stop menstruating. (This is due to the fact that experiencing such conditions is a signal to the body that now is not a great time to start gestating a baby.) However, even in such circumstances the lack of a period will still rarely be noted in fiction.

Periods were historically unlikely to be addressed

in the media because most writers were male. However, in recent years

, the rise of streaming services coupled with the numbers of women in writer’s rooms has led to an increase in the frequency and accuracy of period depictions onscreen.

Compare to Nobody Poops, No Such Thing as Dehydration, Exposed to the Elements, Frigid Water Is Harmless, and No Dead Body Poops. Aversions usually happen if the period or the menstrual cycle is the specific focus of the work in question, and usually involve First Period Panic, All Periods Are PMS, Menstrual Menace or Pregnancy Scare.