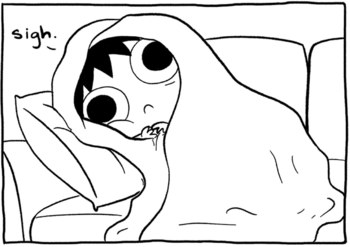 is a semi-autobiographical webcomic written by Sarah Andersen, centered around the messy-hair title character and her day-to-day adventures as a millennial where she deals with social anxiety, laziness, body image, and being an adult.

Also see Owlturd Comix, which can be seen as a Spear Counterpart.