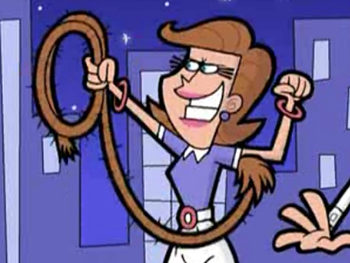 Does not even bother putting on deodorant though.
"Thy beauty is the beauty befitting women, but thy hairs are the hairs befitting men. Hair on a man’s body is comely, but uncomely on a woman's."
— King Solomon to the Queen of Sheba note as reported by the Colloquy of the Queen of Sheba, a Jewish midrash elaborating on 1 Kings 10:1-13 usually dated to the 8th Century CE.
Advertisement:

In Western culture, the majority of women tend to remove their body hair (e.g. leg and underarm hair, and sometimes trim or remove their pubic hair as well) for cosmetic reasons. Various media reflect this in fiction, as almost all female characters have smooth, hairless skin in the aforementioned regions. Despite that, a Hairy Girl may have body hair in scripted storytelling for one of the following reasons:

In Real Life, girls who choose not to shave their body hair are generally associated with some form of counter-culture. As such, a female character may sport body hair as a way to stick it to unfair beauty standards, or simply because she thinks all that shaving is impractical. Sometimes, however, the Hairy Girl is not a taboo in the context of the work's setting, perhaps due to its region or time period. Despite that, this trope is usually just Played for Laughs with throwaway Granola Girl characters who are hippies or feminists. Another common comedic use of the trope is when referencing French girls, a stereotype which exists in fiction much more than in Real Life.

Meanwhile, if the trope isn't actually rubbing your face in it, odds are that it's a means to simply distinguish a female character as unique, rugged, or au naturale. High school girls like this are traditionally associated with Nerds.

Compare the New-Age Retro Hippie and Granola Girl. Warts and All is another related trope, especially when it's not meant to be funny. Compare female examples of Bald Head of Toughness, where a lack of hair on the head is used to communicate that a female character is tougher and sometimes less feminine/more masculine than other women. Similarly, Delinquent Hair that involve shaving/baldness use a lack of hair to combat gendered beauty standards and norms. Contrast Perma-Shave, which is often the complete inversion of this trope, especially in a situation where the women would find shaving impossible. Also not to be confused with Girls with Moustaches, which focuses on the unnatural phenomenon of women possessing thick, properly-styled facial hair.