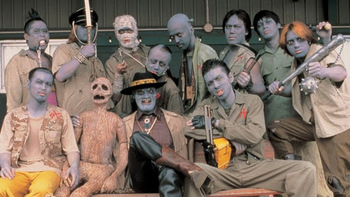 Actual still from the film.

All high school baseball teams have dreaded the day they will have to face off against the Gedo High; with good reason. Gedo High's approach to baseball is to take it as a fight to the death, and they are notorious for leaving no survivors in the teams they face. The principal of an anonymous school, Kocho, while wanting to go pro with his present team, breaks down completely when he learns they will be facing Gedo in the upcoming championship.

A fight on the school grounds raises Kocho's hopes as he sees the troublesome transfer student (rumored to have killed a man, escaped prison, expelled from multiple schools) Jubeh fight one of the school's drop-out bullies, Bancho. The two square off using "Fighting Baseball" (with Bancho swinging and Jubeh trying to avoid the blows, each miss counting as a single Strike) and Kocho becomes convinced he can defeat Gedo using Jubeh's fighting skills. Jubeh, having sworn not to play baseball, decides to help Kocho out. Things are looking up until the day of the game. Jubeh fails to show up (having been imprisoned for no apparent reason) and Gedo High team does its usual game. Jubeh escapes captivity and arrives at the game after it is finished to find a handful of survivors.

The survivors then undertake the task of killing the Gedo High team in order to prevent further casualties and collateral victims falling to their brutal game style. The entire plot ends up in a one-on-one battle of Jubeh against the Gedo High Coach.

Starring Tak Sakaguchi (Versus) and directed by Yudai Yamaguchi (who was, interestingly, a writer in the movie Versus himself), Battlefield Baseball can best be explained as Shaolin Soccer turned Up to Eleven.