Webcomic / Scandinavia and the World 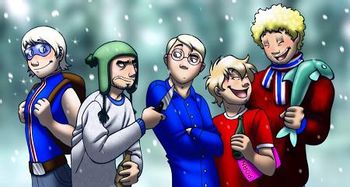 The central cast, de-chibified. From left to right:
Iceland, Finland, Sweden, Denmark and Norway.
Norway: Svalbard, wh...what happened?
Svalbard: You were being an idiot. That's what happened.
Advertisement:

Scandinavia and the World

is a webcomic by Humon. It is a comic about stereotypes, history and culture in the form of national personifications interacting with one another, à la Hetalia: Axis Powers, and focusing on, well, Scandinavia. The main characters are Denmark, a cheerful, but culturally naïve party boy; Norway, a friendly and calm nature lover; Sweden, the uptight technology expert; Finland, a quiet drunkard with psychotic tendencies; and Iceland, a sparkly, larger-than-life pretty boy.

An Animated Adaptation (for the Web) is being produced. Finished pieces can be seen here.

Her DeviantArt account and main comic regularly feature works based on Nordic folklore, with plenty of notes.

Scandinavia and the World provides examples of: