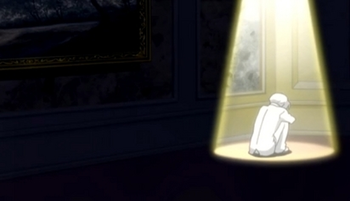 I think we broke him.
"I really feel like sobbing to myself in a dark corner right now..."
— Phoenix Wright, Turnabout Storm
Advertisement:

When things look depressing for our comical anime hero, what's the best course of action? Why, go Super-Deformed, sit in a corner, wrap your arms around your knees, and sulk like you've never sulked before! Preferably in a Dramatic Spotlight. Bonus points if you manage to act gloomy enough to attract ghosts or grow mushrooms in your dark, damp corner of woe. The technical term for this is latibulating.

Often combined with Color Failure. Compare Troubled Fetal Position when this position is adopted out of shock rather than sulking. See also Shower of Angst.