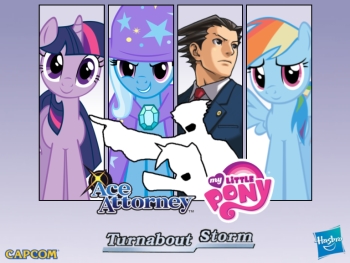 Just when you thought the Layton crossover was weird.
Twilight Sparkle: Hey! You're a human aren't you?
Phoenix Wright: Yeah, I'm a human... *beat* WAIT, WHAT!?
Advertisement:

Turnabout Storm is a fan crossover between Ace Attorney and My Little Pony: Friendship Is Magic by NeoArtimus

. This fan work, instead of using a written format as it was first conceived as, shows itself as a movie using the Visual Novel style the Ace Attorney series is known for, with the addition of voice acting for all characters.

Rainbow Dash, best flier in Ponyville, is accused of murdering the Pegasus Ace Swift, the favorite to win an upcoming race called the Equestrian 500 that Dash is also set to compete in. Now that she faces punishment for what would be the first murder in a long time during Celestia's reign, one of her best friends, Twilight Sparkle, sets out to find a lawyer to represent her. After all of her attempts to find one end fruitless, she makes one last try by casting a spell to summon the greatest defense attorney in Equestria, but she accidentally calls for the greatest defense attorney period, and said attorney turns out to be a confused and non-equine Phoenix Wright — At least, that's what Twilight claims to be the reason how Wright ended up there.

Now Phoenix finds himself stuck in a strange world, one where candy colored talking hors... err... ponies are the norm of the day, and the creatures of myths are just some other species — Yet one where justice still must be served, where the innocent can still be punished, and where they still need the light of someone who trusts and believes in them, someone ready to do whatever it takes to save them.

Thus starts Phoenix's journey to adjust to this new world, and search for the truth behind this strange new mystery he's been wrapped up in. Trailer here

. note Part 3 - Phoenix was uploaded months before Part 3 - Twilight, but since the latter was supposed the be released before the former, NeoArtimus recommends watching the series in the order provided by the playlist. Please be warned that all the parts are very long, clocking in at around 9 hours of content. Beware of an Archive Binge.

A sequel series, Elements of Justice, was released on June 5, 2019.

open/close all folders
A-C
D-F
G-I
J-L
M-O
P-R
S-U
V-Z
"No matter how far you run, no matter how long you hide, the finger of justice will never lose sight of you."
Feedback

Phoenix Wright and Pinkie Pie continue the time-honoured Ace Attorney tradition of arguing about the difference between a ladder and a stepladder... while trespassing.

Phoenix Wright and Pinkie Pie continue the time-honoured Ace Attorney tradition of arguing about the difference between a ladder and a stepladder... while trespassing.