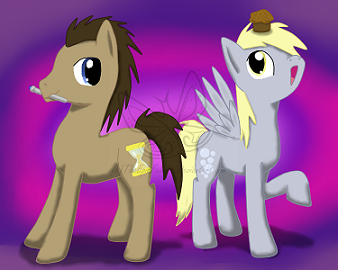 The Doctor's epic adventures through time and space…with ponies!
Advertisement:

Because you knew, deep down, that it was just a matter of time…

An audio series on YouTube based around the popular background characters from My Little Pony: Friendship Is Magic series, Doctor Whooves and Ditzy Doo, a.k.a. Derpy Hooves.

The series commences when the TARDIS materializes in the area outside Ponyville. The Doctor steps out, bewildered at his arrival in such a colorful place, and is even more surprised to find that Ditzy can talk when the two encounter one another. She tells him that all ponies in this land can talk, and that he himself is now a pony, much to his bemusement.

The Doctor surmises that the TARDIS has brought him to Equestria to participate in an important event, and when the Doctor tells Ditzy this, she suggests that it could be the upcoming Summer Sun Celebration. Before they go, the Doctor taps Ditzy to act as his temporary assistant.

This series is notable for being able to work into both canons, running parallel with events in My Little Pony: Friendship Is Magic and incorporating elements from Doctor Who, in contrast to Doctor Whooves Adventures, which is more of an alternate universe to the two.

And so ends the first episode and begins the adventure of our two heroes.

As of November 2022, the team's output includes 14 episodes and assorted shorts/specials, listed below in order of their release:

run by the production staff. At BronyCon 2014, they announced a Spin-Off series, Jot's Journal, which will focus on the messenger dragon Jot (introduced in Episode 8). The first episode was posted to YouTube in November 2015, and the series playlist can be found here

Can't get enough? Keikoandgilly (The Doctor's original voice actor) and BaldDumboRat (Derpy) livestreamed (and later placed on YouTube) the results of their playing Portal 2... In character as The Doctor and Derpy Hooves, thus making an hilarious three-way crossover between Doctor Who, My Little Pony: Friendship Is Magic and Portal 2's co-operative multiplayer. Yes, it's every bit as psychotically hilarious as you're imagining. They do slip out of character a few times, but it's worth it to hear the Doctor's anguished cry of "Ditzzzzzyyyyyyyyyyyy-*splashboom*" every time Ditzy's player mistakenly drops him to his doom. Good thing the robot reassembler cuts in before Time Lord regeneration. Especially hilarious thanks to the livestream audience chatting at BaldDumboRat who interprets them in-character as voices in Derpy's head.

To extend the crossovers still farther, Jestre DeRama (The Doctor's current voice actor) has recorded livestreams of himself playing the first five games in the Five Nights at Freddy's series, in character as the Doctor, and posted them on YouTube. The playlists:

The more frustrated he becomes, the funnier his rants get - even more so due to his efforts to keep himself from using bad language during the recording. BaldDumboRat can be heard in the background from time to time as well.

BaldDumboRat and Jestre have teamed up to do livestream playthroughs of Undertale, staying in character as Derpy and the Doctor and providing voices for the game's characters as they go. Can be found here

Tropes that apply to the series go here: